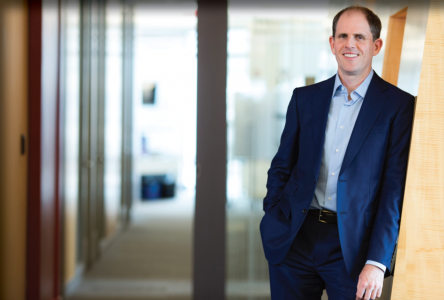 Advantage Futures: Why did DRW first get involved in cryptocurrencies?

Mr. Don Wilson: DRW is always looking for new opportunities, and we encourage employees to come forward with interesting ideas. In 2012, several employees were excited about bitcoin and how it might impact the world. Because we couldn’t decide what was more important, the distributed ledger technology that underlies bitcoin, or bitcoin itself, we got involved in three different ways: We bought bitcoin; we established a trading desk, which officially became Cumberland in 2014; and we co-founded distributed ledger technology firm Digital Asset.

ADV: What is DRW’s role in cryptocurrency markets? What does Cumberland do?

DW: In 2014, we formally established Cumberland as a bitcoin trading desk, one that is uniquely positioned between the traditional financial industry and the nascent cryptocurrencies space. Since its founding, Cumberland has become one of the world’s largest providers of liquidity in cryptocurrencies, with employees in Chicago, London and Singapore. We leverage our 25 years of experience in traditional financial markets and risk management to provide two-sided, institutional-sized liquidity 24 hours a day, 5 days a week.

ADV:  How has trading in these markets changed over time and, in particular, over the last year?

DW: These markets have continuously evolved over the years, but 2017 in particular was an important inflection point. There was a shift in the market as people continued to familiarize themselves with cryptocurrencies, but also started putting real capital into the markets. This was evident in the dramatic growth in cryptocurrency valuation we saw over the course of 2017 and marked a new era of exchange adoption as well; CME, CBOE and Nasdaq all announced plans to list bitcoin futures contracts, with the former two launching before the close of the year.

ADV: What is the significance of the blockchain technology underlying bitcoin?

DW: We recognized the potential of Distributed Ledger Technology early on. This technology provides an efficient way of tracking ownership and enables you to do so across multiple organizations securely. We wanted to explore the possibilities of applying this technology to financial processes like clearing and settlement, which led me to co-found Digital Asset. Digital Asset licenses DLT software to large financial institutions, with an initial focus on complex, multi-party post-trade processing. The Australian Securities Exchange recently announced that it intends to replace its equities system with DA’s technology. It is managed separately from DRW under CEO Blythe Masters, and I remain a member of the Board.

ADV: Many people said the rise of cryptocurrency trading is unlike anything they’ve ever seen. Is this is a financial revolution or a bubble?

DW: Looking at the price action over the last year, the market certainly has many characteristics of a bubble—much like we saw with the dot-com era in the 90’s. We believe something similar will play out. Many ideas and projects in the marketplace will fail, but that process will give rise to better ideas and projects. Our perspective is that many will go on to make a significant impact on the world.

ADV: What does the launch of the bitcoin futures contracts mean for the cryptocurrency trading industry?

DW: The product launches are a natural progression in the maturity of this asset class and are overall very positive for the development of these markets. The futures also reopened the door to an ETF, with both the NYSE and Cboe announcing plans to list, although the SEC recently slowed down that process. These are products institutional banks are familiar with, which could bring more institutional capital into the markets, furthering the development and maturation of the industry.

ADV:  Bitcoin is making a lot of headlines, but there are many active cryptocurrencies. What kinds of demand are you seeing for other digital currencies?

DW: The broader interest in decentralized technologies, coupled with the dramatic increase in bitcoin and other token valuations over the last year, definitely led to interest beyond bitcoin. Rather than referring to these instruments as cryptocurrencies, perhaps a better term is cryptoassets, which encompasses both cryptocurrencies as well as tokens issued as a result of an ICO. Cumberland is active wherever there is meaningful volume and, today, we trade over 20 cryptoassets. We are continuously adding new tokens to our trades based on demand from our counterparties.

DW: While we’ve certainly seen some vulnerabilities in this new space, bitcoin itself has never been hacked. Where you see the most risk is in the platforms built to facilitate crypto trading and storage, which is why it is important to carefully select the products and exchanges to which you connect. We have a rigorous onboarding process, and we apply our 25 years of experience in risk management, operations and security to our cryptocurrency trading practices. The importance of sound operational practices should not be overlooked.

DW: Wall Street has been slowly adopting cryptocurrency over the last year. They have been publishing research on these markets, and they’re definitely having conversations about what is or will be their position and strategy on cryptocurrency. We see a dramatic shift in the profile of our counterparties as more institutional capital enters the space, and the institutional banks are developing and introducing their own corporate offerings and establishing trading desks. For the individual trader, that is likely a good thing because there will be a quickening of the pace at which standardized technology is introduced. And if more brokers compete for execution and routing business, that usually leads to price competition and more readily-available research, which benefits the solo trader as well.

Don Wilson got his start in the derivatives industry in 1989, focusing on capturing opportunities in the markets through technology, research and risk management. He founded principal trading firm DRW in 1992 while trading in the Eurodollar options pit at the Chicago Mercantile Exchange. Today, DRW has more than 800 employees at seven global offices and trades in dozens of markets around the world.

View the entire issue of Inside Advantage here.