Fed Indecision 2015: Is the Wait Almost Over?

All examples in this report are hypothetical interpretations of situations and are used for explanation purposes only.  The views in this report reflect solely those of the authors and not necessarily those of CME Group or its affiliated institutions.  This report and the information herein should not be considered investment advice or the results of actual market experience.

Ever since former Federal Reserve Chair Ben Bernanke started his “taper-talk” about removing quantitative easing back in May 2013, market participants have been focused on the next big decision – when the Fed would start pushing short-term interest rates higher.   The answer may finally arrive this fall. 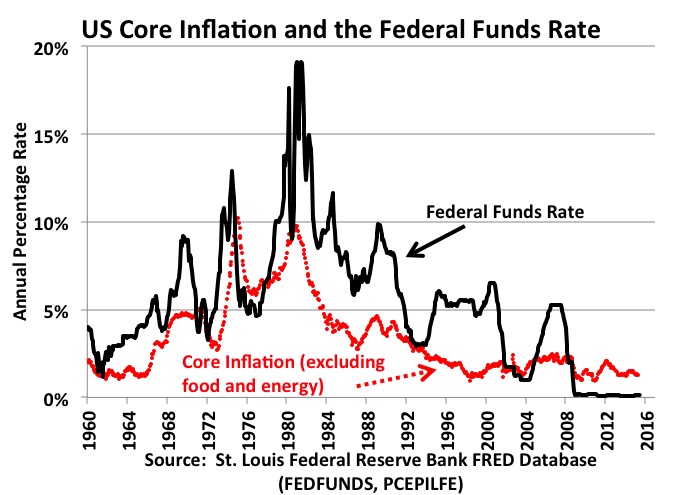 The Fed has repeatedly made clear that it wants to practice patience, and that the rate-hike decision depends on how the US jobs and inflation data evolve.  The Fed seems to view the US economy like a hospital patient that suffered a severe heart attack.  The patient was admitted to the intensive care unit back in late 2008, and emergency treatments including zero rates and multiple rounds of quantitative easing were prescribed.  As the condition of the patient improved, the QE programs were ended in the fall of 2014.  So now the only question is whether the patient is healthy enough to walk out of the hospital without the need of any further emergency measures, such as zero rates.

Well, after five and a half years of steady, if not spectacular economic growth, the jobs and inflation data are looking quite convincing that the US economy is sufficiently robust to no longer need zero rates.  The economy is consistently creating over 200,000 net new jobs each month.  The unemployment rate has fallen to 5.1% and is trending lower.  Hourly wage growth has been very stubborn, however, even that measure is showing signs it might be inching upward.  The deflationary fears that were gripping markets back at the end of 2014 and early 2015, as oil prices collapsed and the US economy hit a weak patch, have abated.  Core inflation has not yet risen to the Fed’s 2% long-term target, yet the removal of fears of deflation should allow the Fed to count the core inflation rate as close enough to 2% and moving toward that target, so as not to be a reason for further delay.

There are some longer-term reasons the Fed may finally be willing to raise rates, too.  The zero rates policy penalizes savers, especially retirees.  Removing this distortion may even help boost consumption, since with little to no income coming from fixed income portfolios, savings rates have needed to rise for parts of an aging population increasingly worried about retirement.  And, the evidence that zero rates and quantitative easing provided much stimulus to the economy remains highly debatable.  What has been more evident, however, is that QE and zero rates probably have had their impact on prices of financial assets, including stocks and bonds.   That is, continuing the Fed’s emergency policies long after economic growth has resumed runs an increasing danger of encouraging market participants to take on more risk in search of returns than may be prudent.

Taken all together, the Fed finally seems ready to agree to a compromise arrangement between its “hawks” (i.e., those who wanted to abandon zero rates a long time ago) and its “doves” (i.e., those who feel there is little harm in waiting longer).  The arrangement seems to be that short-term rates can be pushed higher if the pace is very slow and incremental.   Last time rates were raised, back in 2004, then Fed Chair Alan Greenspan engineered a 17-step process of raising rates 0.25% at each succeeding Federal Open Market Committee (FOMC) meeting, taking the federal funds rates from 1% to above 5%. Fed Chair Janet Yellen has made it clear that this time will be different.  Once the first step is taken, the Fed may skip one or two meetings between rate increases, although the 0.25% per step is likely to stay.  Also, the Fed does not appear to have any intention of raising rates as high as former Chair Greenspan did.  This time around the Fed might move rates to between 1.5% and 2.0% and simply stop, possibly for a year or more, and watch the inflation and jobs data to see what develops.

Another complication this time around is the huge excess supply of federal funds, which is a hangover from the massive QE programs.  When the Fed bought assets, such as US Treasuries and Mortgage-Backed Securities, for its portfolio, it paid for them by crediting the accounts at the Fed of the financial institutions that had sold the Fed the securities.  Since most of these “federal funds” as they are known were not needed to meet reserve requirements, they fell into the category of excess reserves.  Before 2008 and subsequent QE programs, excess reserves were typically very small – just a few billions.  Now, they are over $2 trillion.  This huge overhang of federal funds makes it harder for the Fed to control short-term rates.  So, more than likely, the Fed will raise the rate it pays on excess reserves, currently 0.25%, as a way to “enforce” higher short-term rates.  This has the unintended consequence of raising the Fed’s own costs of funding its huge portfolio, so it will cut a little into the Fed’s profits.  As a side note, this should not matter, but it might.  The Fed contributes most of its profits to the US Treasury each year, which helps to reduce the Federal budget deficit.  Some analysts think the Fed has had one eye on its profits and wanting to protect them, and so was willing to delay any rate rise (higher funding costs) as long as it could.  Of course, the Fed denies this logic played any role in their delaying tactics.

Also, we need to ask what the economic and market impact might be of a slow path to slightly higher short-term rates?

Unless one has been hiding under a rock, everyone has probably gotten the email that at some point, rates are going up.  Such a well-telegraphed decision, even with uncertain timing, probably means that the market reaction will be muted.  Indeed, it might even be counter-intuitive, in the sense of “a sell the rumor, buy the fact” type of reaction.   And as already discussed, the impact on consumers may even be positive, as many retirees have suffered from not receiving much interest from their fixed-income savings.  The impact on equity markets may be positive, too, over the long-haul, since the signal being sent is that the Fed thinks the economy is healthy enough to stand on its own without emergency policies.

Finally, we need to ask what might happen to delay the Fed further.

Greece comes to mind, but we think probably not.  There is another bailout in the works.  And more importantly, the European Central Bank (ECB) was created to manage and protect the single currency.  The ECB can probably be relied upon to do whatever it takes to make sure any fallout from a Greek tragedy will not spillover in the EU economy or hurt the Euro.

China is also a risk.  The Chinese economy has been decelerating over the last several years, and further deceleration seems likely.  Also, the Chinese stock market has been on an impressive roller-coaster ride, and the currency has slid a little.  There is no sign, however, that the Fed would delay a rate rise decision based on Chinese economic data unless it thought, in the extreme case, that a Chinese recession was coming and it would cause the US to go into recession.  This is a highly unlikely scenario.

The base case scenario seems to be that the Yellen-Fed is just about ready, possibly in September 2015, to put the legacy emergency policies of the Bernanke-Fed behind it.  When Janet Yellen was handed the gavel in February 2014, she immediately reformed the Fed’s forward guidance policies to de-emphasize a focus on one number, such as Bernanke’s spotlight on the unemployment rate.  Then, in October 2014 she successfully ended the Bernanke QE programs without any real problems.  Next up, the Yellen-Fed seems set to abandon the Bernanke zero rate policy.   After that, the Fed may stop reinvesting the principal and interest it receives from its portfolio and start to shrink its balance sheet.  The Yellen-Fed may be data dependent and slow moving, yet be sure, it is unwinding the Bernanke legacy, on its own terms, and at its own pace.