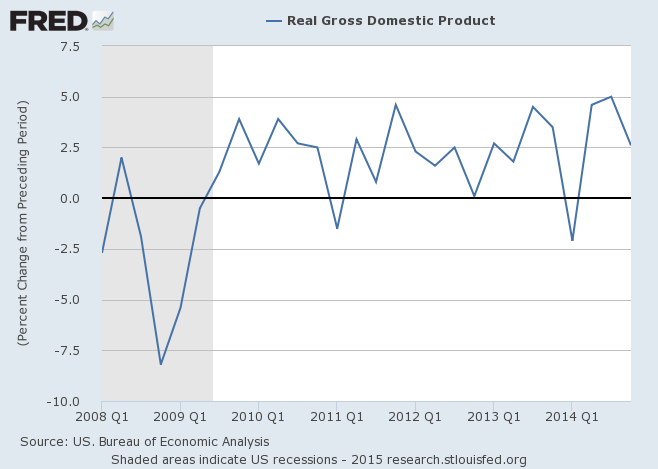 Following the Great Recession, the U.S. economy has grown at an average annual rate of 2.3 percent.  This relatively lackluster growth compared to other recoveries has also been slow to increase not only employment, but also to generate inflation in a manner markets have come to expect.  However, this appears to be changing as U.S. GDP has averaged 3.6 percent over the last three quarters.

As we begin 2015, the consensus forecasts for GDP this year is between 2.5-3.0 percent.  It seems almost every year since 2009; economists have been predicting the U.S. economy to accelerate faster than the previous year.  In 2014, they were proven correct, but only after a terrible first quarter.  The last three quarters of 2014 have witnessed the best growth period of the recovery.  Economists have been predicting accelerating inflation every year as well.  The core personal consumption expenditures deflator or PCE (Federal Reserve’s favorite inflation gauge) is expected to rise from 1.6 percent to 1.8-2.0 percent by the end of 2015. 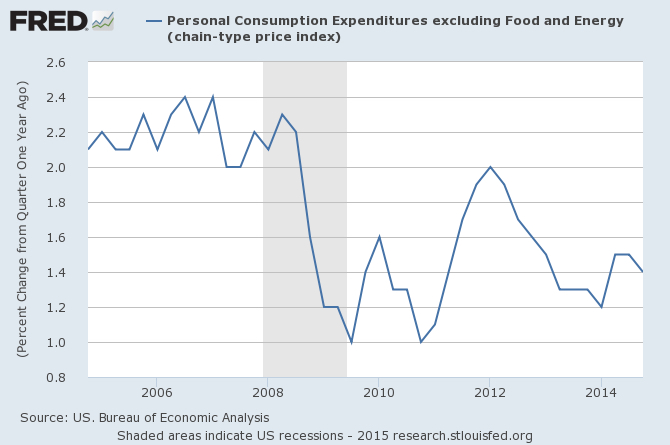 In this article, we’ll review the key factors driving these assumptions and their impact on potential changes to Federal Reserve policy.

The Outlook for Growth is Positive

Succinctly put, the headwinds from the Great Recession will diminish as housing, consumers, and government spending are all seeing improvements for 2015.  The housing sector has rebalanced from the overhang it experienced with prices recovering, housing stock being absorbed, and measures of distress such as homes entering foreclosure and mortgage delinquencies falling.  Consumers are seeing the benefits of higher home prices, lower cost of energy, and increasing stock values improve their financial asset balance sheets while lower interest rates continue to reduce the cost of their debt burden.  Lastly, the government sector ceased being a drag on overall economic activity.  State and local governments have issued over $30 billion in new bond issuances for a range of activities while the federal government jobs outlook has stopped contracting.  These 2014 trends remain favorable for enhanced growth in 2015.

On the positive development side, the key factors generating a positive outlook are lower energy prices and higher job growth with slowly increasing wage gains.  For employment, the outlook for 2015 remains on a positive trajectory with the consensus view that it will decline from November’s 5.8 percent to below 5.4 percent.  The U-6 or broad unemployment rate, which takes into account discouraged workers and involuntary part-time workers, fell to a new low of 11.4 percent and fell 1.6 percent over the last year.  Like GDP, the recent data point to a strengthening economy with November’s nonfarm payroll the highest in several months and well above the 12-month average of 224,000.  The fact that unemployment has been falling during relatively weak growth is a function of declining labor force participation as baby boomers retire and low historically slow growth of labor productivity.  Unlike the UK, the U.S. recovery has not drawn back in “lost” workers from the decline in the participation rate.  This is important, as it should mean that to attract and retain workers, employers would need to be raising wages.  The average hourly earnings rate has moved up from $24.15 in November of 2013 to $24.66 in November of 2014.  Market estimates are projecting a 2.5-3.0 percent growth for 2015.  The bottom line is that both job growth and earnings growth will enhance consumer spending and the economy.

On energy, the recent collapse of Brent crude prices from a June high of $115 to below $55 in January has helped drive down the price of U.S. gasoline.  The $60 drop in Brent adds around $170 billion to consumers spending power.  Lower income households are the major income group beneficiary of this decline in prices and generally will spend the windfall.  The drop in energy prices will benefit the U.S. Defense Department, as they are the largest buyer of energy in the country.  Next, the U.S. remains a net importer of crude oil and therefore a drop in the price will improve the U.S. balance of trade and thereby increase the value of the U.S. dollar and U.S. purchasing power.  The recent U.S. government decision to allow the export of additional distillate products will enhance this improvement in the trade/current account.  Lastly, the drop in energy prices has two positive global impacts.  First, major energy country importers, like India and China, will benefit similar to the U.S.  Second, the reduced inflation outlook should spur fiscal and monetary expansions in Europe and Japan.  Overall, lower energy prices have a large, positive impact on both the domestic and international economy.

Lower Energy Not Good For Everyone

The dramatic drop in oil prices will have negative effects on those that produce it.  In the United States, North Dakota, Pennsylvania, and Texas will all be hurt by the decline as exploration and production levels are curtailed.  As an example, one of the largest shale oil producers in the Bakken field, Continental Resources, has cut its capital budget for 2015 twice since October.  They reduced their overall rig count by 32%.  Also, oil companies will begin to write-down assets and to take losses, which has driven down share prices of these companies.  Oil companies may cut spending on a range of capital projects from rigs to refinery upgrades to offshore platforms.  In turn, the drop in oil has created uncertainty for the markets overall as it may indicate that the global economy is weak and decreased the demand for energy.

Perhaps the biggest negative on the decline in oil prices is the uncertainty over Russia.  U.S. Senator John McCain once famously said that Russia is merely a gas station.  The markets apparently think there is some truth to this as Russia generates over 80 percent of its tax revenues from oil.  Therefore, the drop in price has cut their intake by almost 50%.  This can mean many things for Russia.  First, the government can’t spend as much as they once projected.  Second, the economy will take a major hit.  The central bank of Russia predicts a decline of GDP between 4.5-4.7% in 2015 due to oil.  The Russian currency and stock markets have fallen precipitously already and may sustain further losses.  Finally, the politics could become unstable as President Vladimir Putin attempts to consolidate power and deal with the sanctions placed on Russia from their annexation of Crimea.

How will all of this impact the United States and the central bank’s view of the economy?  In October of 2014, the Federal Reserve ended its quantitative easing program that had been in place since September of 2012.  The program massively expanded the central bank’s balance sheet to over $4 trillion while forcing down both long-term and short-term interest rates.  Since the cessation, the market’s focus has been on when the Federal Open Market Committee (FOMC) would begin to raise interest rates.  In it’s most recent statement, the FOMC said, “To support continued progress toward maximum employment and price stability, the Committee today reaffirmed its view that the current 0 to 1/4 percent target range for the federal funds rate remains appropriate.”  This eliminated the “considerable period of time” language from the statement and indicated that the central bank is moving forward their expectations for when they will raise interest rates.  Yet, FOMC chair Janet Yellen made it clear during the press conference that the central bank will be data dependent with respect to inflation and the labor markets.  Remember according to the Federal Reserve’s own metrics, inflation and labor are still well below their targets.  This suggests they will keep interest rates low longer even as the slack is taken out of both.  Therefore, the markets are anticipating the first rate hike of 25 basis points by the FOMC in June of 2015 with two additional hikes by the end of the year.

The U.S. economy has traveled a long distance from the dark days of the Great Recession.  While the “Polar Vortex” in Q1 2014 set everyone’s estimates of GDP growth down, the acceleration over the last three quarters has been excellent.  This is expected to continue into the first half of 2015 for both GDP and employment.  The second half of the year should see higher wages, jobs, inflation, and interest rates.  There are many risks to these forecasts from geopolitical to slowing global growth. A combination of these risks coupled with an earlier than anticipated U.S. rate hike will likely slow the economic growth rate, but not kill the recovery.  And that’s good news for a good year.

Andrew B. Busch is the host of VoiceAmerica’s “Engage with Andy Busch.” The show covers politics, money and media with top name guests like Jared Bernstein (Joe Biden’s former chief economist) to Craig Bouchard (CEO Signature Holdings) to House of Representative’s majority whip Congressman Peter Roskam. Andy is also the Editor-in-chief for the global market and public policy newsletter, “The Busch Update” and his views can be found on www.andrewbusch.com.

For 22 years, Andy was with BMO Capital Markets and has written the Busch Update for the last 13 years. He was named BMO’s Global Currency and Public Policy Strategist in 2007. On a regular basis, Andy consults with staff from Congress on economic, financial market and tax issues. In 2011, Andy was asked to testify in front of Congress on the effectiveness of the 2009 Stimulus package. From 2004 to 2008, he was an outside advisor to the US Treasury Department and White House on the economy and financial markets. Andy had a similar role for the 2008 McCain campaign. He has met and advised the last three US Secretary of the Treasury including John Snow, Hank Paulson and Tim Geithner. Andy is also a political consultant on campaign strategy for the 2014 US Congressional Mid-Term elections.

Andy is widely followed by clients and media for his daily commentaries and his frequent appearances on major financial news outlets, including: the WSJ, The Hill, Politico and USA Today. In 2007, he published his book entitled, “World Event Trading: How to profit from today’s headlines” by Wiley.