Weather, Crops and Trade: Instability on the Rise

El Niño is long gone; La Niña never made an appearance; and a very weak new El Niño is now struggling to gain traction. In the meantime, renegotiating the North American Free Trade Agreement (NAFTA) is a priority of the US Republican Administration; and while the talks are just beginning, the rhetoric has been strident and raised many fears in the US farm community. In the bread baskets of Latin America, corn and soybean exports from Brazil and Argentina are on the rise as these countries recover from political instability and experience reasonably favorable crop growing conditions. All of these themes are independent of each other, yet influencing agricultural market expectations at the same time.

Every El Niño is Different

New longer-term weather patterns suggest relatively unsettled conditions, yet with no threat of drought for the US, Brazil and Argentina. A strong El Niño peaked in the summer of 2015 and brought a relatively mild winter to the US heartland; rain came to Brazil ending their drought, while drought emerged in Indonesia and heat in the Australian summer. Often, a strong El Niño is followed by its opposite—La Niña, with cooler than usual waters along the Pacific equator. While there were signs of La Niña forming by the fourth quarter of 2016, it fizzled out as waters are warming again modestly.

For Brazil and Argentina, the new pattern is relatively benign for heat or drought, although Argentina is a little more at risk to drought in 2018 than Brazil if the El Niño pattern were to strengthen materially. The situation in the US heartland is much more complex.

A weak El Niño means little to nothing for the US. The strong El Niño of the summer of 2015 was accompanied by much warmer than usual surface waters in the northern Pacific. This weak El Niño pattern, however, is accompanied by cooler waters in the Pacific northeast (along Canada and northwest US) with warmer than usual waters just a little south. The result appears to be a volatile weather mix for the US mainland as sea surface water temperatures have led to shifting wind patterns over the Pacific as they blow toward the US.

Volatile weather does not mean drought in this case. US drought conditions are only prevalent in eastern Montana, into North Dakota, and creeping into the upper parts of South Dakota, leaving the vast majority of the crop lands unaffected. The mixed conditions, however, are creating moving patterns of severe rain in some parts of the country and heat in other parts. This weather volatility already has impacted the wheat crop, but overall the unsettled conditions mostly pose a risk as to what might occur in the harvest seasons coming up. 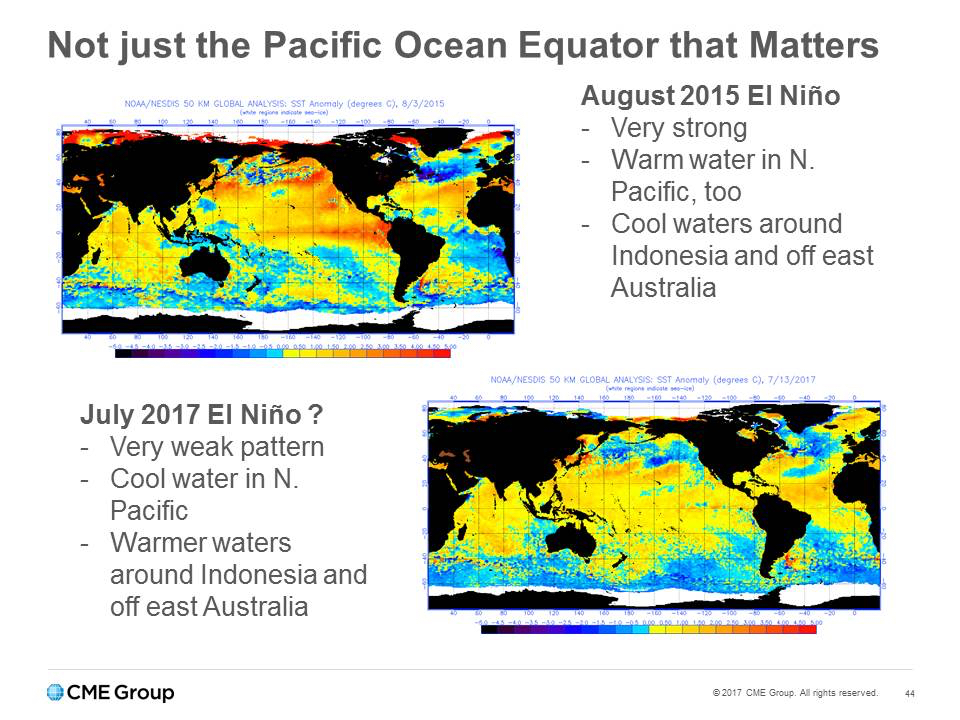 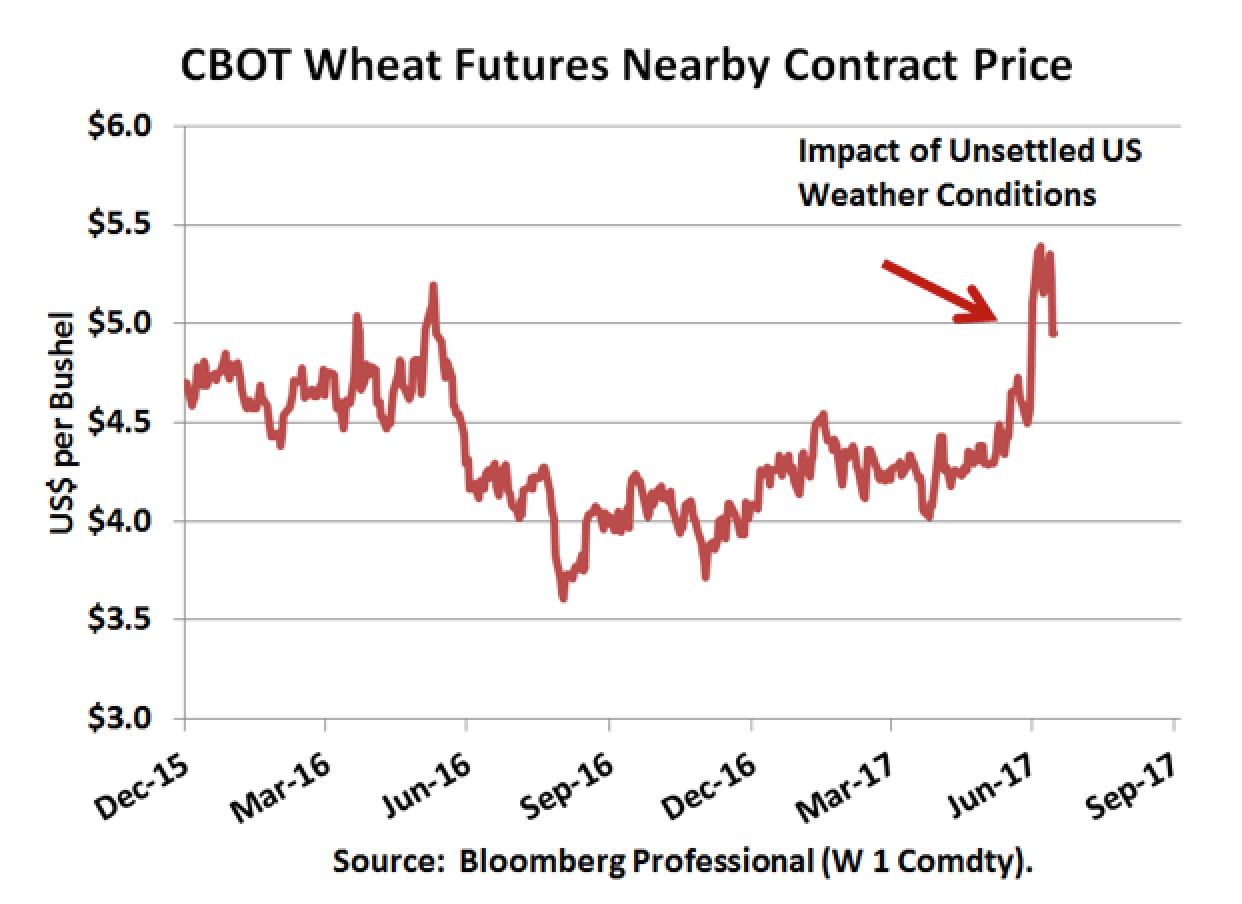 Risks are Real for US Farmers

As we move onward from the weather to NAFTA trade negotiations, the agricultural market picture gets a little more complex. President Trump made renegotiating NAFTA a major promise of his campaign, along with building a border wall between the US and Mexico. Needless to say, this has created more than a little uncertainty about agricultural trade between the US and Mexico, and impacted the Mexican peso as well.

US farm exports quadrupled once NAFTA was agreed. Whether NAFTA was good or bad for other parts of the US economy is debatable, however, for the agricultural sector it was an unambiguous home run. Back in 1994, US agricultural exports to Mexico were around $4 billion and they are likely to approach $19 billion in 2017—corn and cattle exports have led the way. US farmers are understandably afraid they might be a bargaining chip for US manufacturing jobs.

Mexico has not been sitting idly and just waiting for the new trade deal to be negotiated. Mexico has been diversifying its source of agricultural and related imports. Specifically, Mexico has explored the alternative of receiving corn and soybean meal exports from Brazil and Argentina. The shipments have started to arrive from Latin America and reduce imports from the US. Mexico is buying less US soybean meal and corn in 2017. Chicken meat exported from the US to Mexico has been impacted as well. Chickens are, well, effectively two-legged soybeans, and demand for chicken meat is an integral part of the soybean community. Cattle exports also appear to have been impacted. In short, just the talk of renegotiating NAFTA after 23 years has unsettled the outlook for US agricultural exports.

The NAFTA debate in the US is far more complex than farmers versus manufacturing jobs. The US also exports natural gas from Texas to Mexico, with pipeline expansion plans suggesting more growth to come for this business. Mexico has used the cheaper US natural gas to replace diesel oil as a primary fuel for electrical power generation, saving money and carbon emissions at the same time. So, both US farmers and US energy producers want to be exempted from any trade deals designed to create US manufacturing jobs. It will be an interesting negotiation, for sure.

Brazil and Argentina have both experienced extreme political risk and it hit their economies very hard. In different ways, both countries are on the mend, and have reformed laws to promote agricultural production and exports to good effect.

For Argentina, the election of a new President back in November 2015 was a game-changer. President Mauricio Macri, the former Mayor of Buenos Aires, won a very close run-off vote. Since then, he has orchestrated a number of reforms that have revived confidence in the economy and worked to increase agricultural exports.

Brazil’s saga of corruption and political risk has a few more chapters to go, but the worst does appear to be over. And, some degree of resolution appears on the horizon with the October 2018 Presidential election. Still, reforms have been enacted, especially in the energy and agricultural sectors, which are clearly working to increase production and exports.

As in the case of Mexico, the path of the currency has been quite interesting. The peak of the risk-inspired currency depreciation was back in September 2015, with the Brazilian real having fallen to a low of around 4.17 BRL/USD from below 3.00 BRL/USD a few years earlier. Now, in the summer of 2017, the Brazilian real trades much more strongly below 3.20 BRL/USD, even with the continuing charges of corruptions surrounding President Temer. Indeed, the relatively small currency impact of the latest scandals underscore that the currency markets are now increasingly focused on the positive aspects of the 2018 Presidential elections. Thus, there are signs of growing enthusiasm for the currency among emerging market FX traders as double-digit short-term interest provide considerable compensation for the continuing political risks. After all, everything in the currency world is relative, and going from terrible to just poor political conditions was able to spark a rally. From our perspective, the currency is the canary in the coal mine, and this canary is alive and singing, suggesting stronger export performance on the horizon as well as reduced political risks. 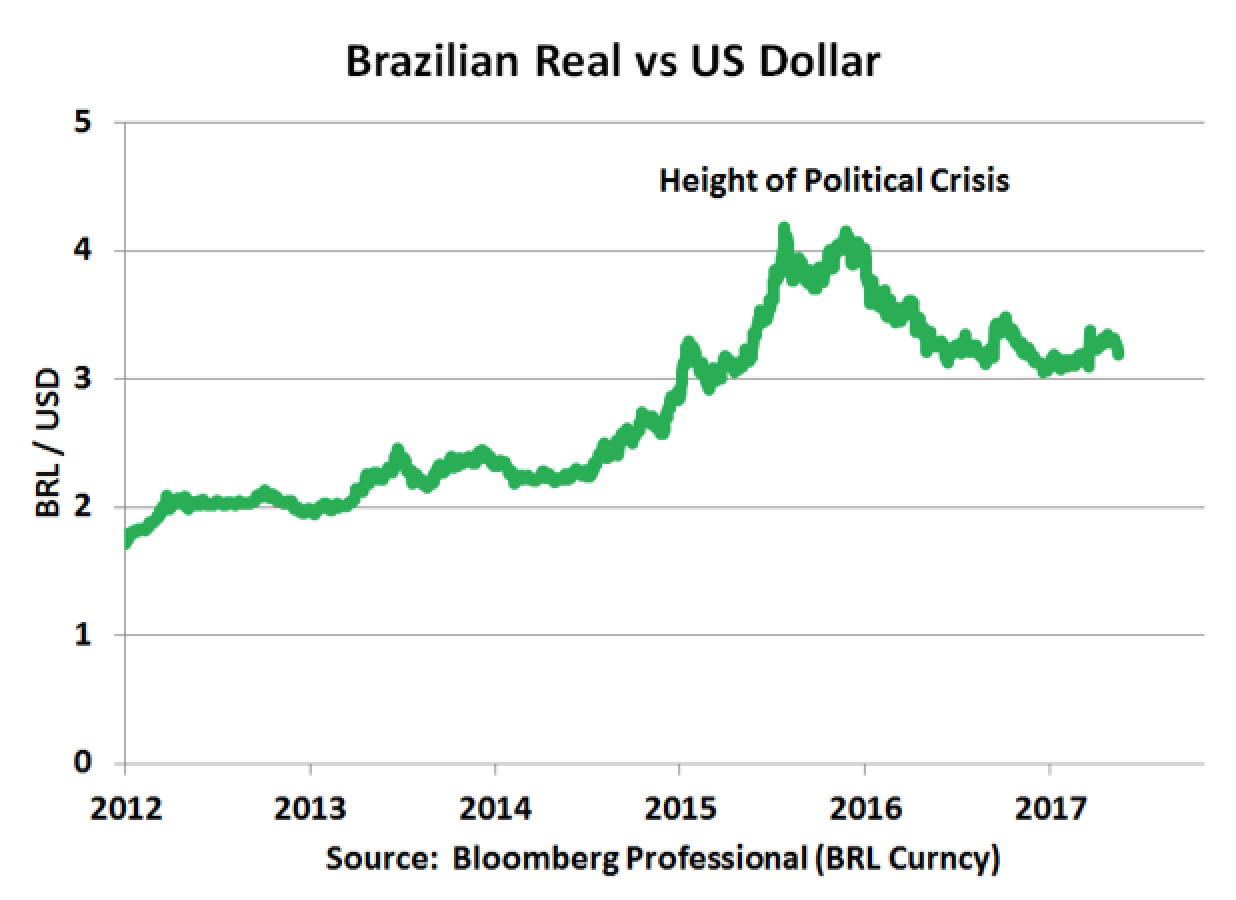 Bluford (Blu) Putnam has served as Managing Director and Chief Economist of CME Group since May 2011. He is responsible for leading economic analysis on global  nancial markets by identifying emerging trends, evaluating economic factors and forecasting their impact on CME Group and the company’s business strategy. He also serves as CME Group’s spokesperson on global economic conditions and manages external research initiatives.

All examples in this report are hypothetical interpretations of situations and are used for explanation purposes only. The views in this report reflect solely those of the author and not necessarily those of CME Group or its affiliated institutions. This report and the information herein should not be considered investment advice or the results of actual market experience.